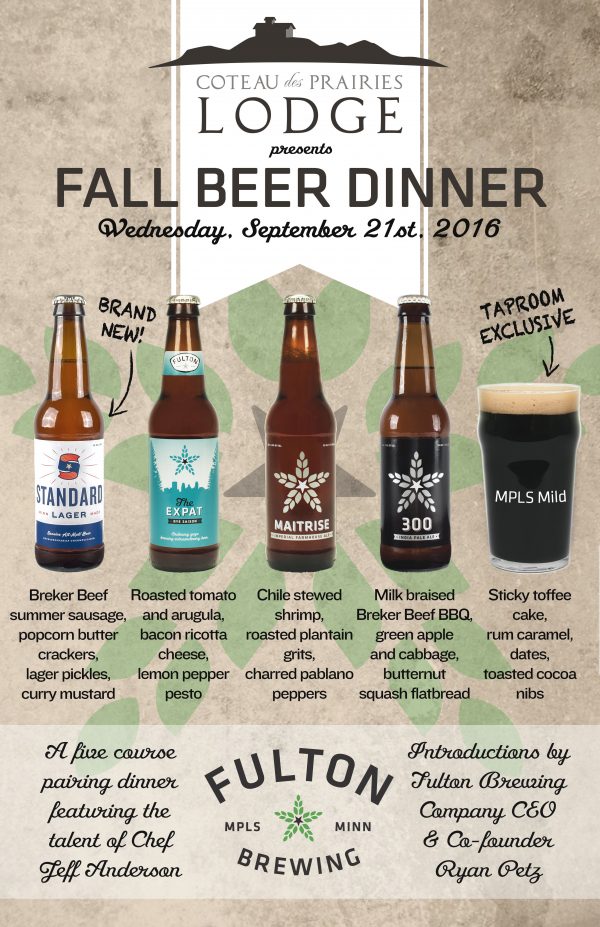 To celebrate the coming of fall, we are hosting a unique beer dinner and live music event and live brewing demonstration on the evening of Wednesday, September 21st. We are featuring amazing craft beers from Fulton Brewing Company paired with a multiple course dinner designed and prepared by Executive Chef Jeff Anderson from Blue Plate Restaurant Co.

To kick off the evening, the talented Brady Toops will perform a concert. Brady, the small town Minnesota singer/songwriter who is becoming known on the national scene, is making a stop at the lodge on a tour across the upper Midwest to showcase music from his upcoming album. You don’t want to miss this!

We have been doing this beer dinner thing for a few years now and we have always wanted to incorporate an actual brewing component into the dinner. Well…our farm grown hops will be ready to pick and the plan is to brew a ‘wet’ hopped beer at the dinner as a demonstration for our guests. Juno Choi, a brewing industry expert from BSG (Brewer Supply Group), will be on hand to answer any questions about the brewing process. Jared Stober, CEO at Two Track Malting, will be available to talk about craft malts grown and malted in North Dakota.

At our Fall Beer Dinner, you will experience a ‘one night only’ menu complete with brewery stories and expert pairings. Ryan Petz, president and co-founder of Fulton Brewing Company, will introduce each of his beers. Chef Jeff will describe the pairings as each course is served.

Our Fall Beer Dinner guests will be among the first to try Fulton’s new year round beer ‘Standard Lager’. Standard is an all-malt American lager, amber in hue and full of flavor. It is as American as baseball and apple pie. We will also be featuring Fulton’s Taproom exclusive ‘MPLS Mild’, an English Dark Mild Ale. It’s perfect for ushering in the chilly fall evenings ahead.

Fulton Brewing Company was founded in 2009 by a group of young guys who were homebrewing out of a South Minneapolis garage. Their dream was to build a real Minneapolis brewery in 5-10 years, and quit their day jobs along the way. They never guessed they’d build two Minneapolis breweries in three years. Fulton is now a staple on tap lines and liquor stores across the region. They have built a reliable lineup of flavorful craft brews for beer lovers across the taste spectrum.

Fulton president and co-founder, Ryan Petz, will be introducing his delicious beers at the dinner and sharing stories from his experience in the craft beer business.

Jeff Anderson is the Culinary Brand Manager for Blue Plate Restaurant Co. and has served as Executive Chef at multiple Twin Cities restaurant including The Lowry and The Freehouse. His amazing ‘cooking from scratch’ style has earned him quite the following. Jeff makes everything in house and that will be the case for our Fall Beer Dinner. Everything on the menu is made fresh just for the event.

Jeff is a familiar face in the kitchen at Coteau des Prairies Lodge where he has already put together some incredible beer pairing dinners. His previous pairings at the lodge featured Brau Brothers Brewing Co., Lucid Brewing Co. and Fargo Brewing Co. 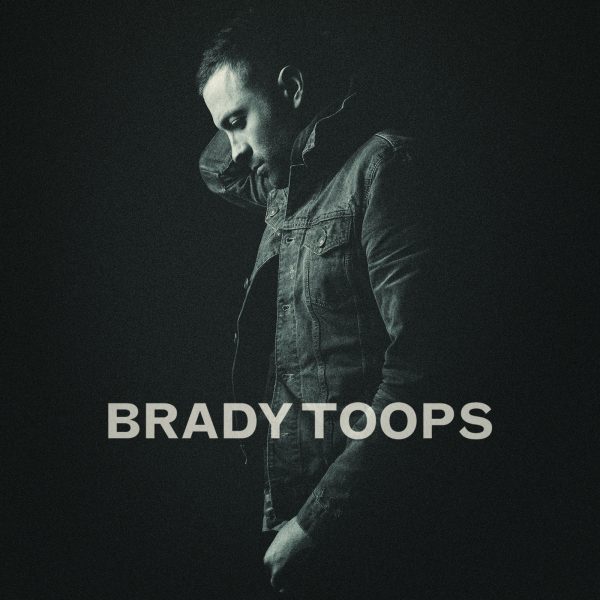 Having grown up in New London, a small Minnesota town, Brady Toops spent the majority of his early years running around on diamonds and athletic fields. After making a brief stint in Minor League Baseball with the St. Louis Cardinals, he left the world of athletics in 2006 to pursue his first love, music. Now based out of Nashville, TN, Brady Toops released his latest project, a self-titled full length album in 2013. His latest album displays a unique combination of spirituals and folk tunes, showcasing Toops’ gospel roots. As an indie artist who often defies category, Brady continues to redefine the proposed gap between the sacred and secular, making music that truly appeals to the soul.

The event is on Wednesday, September 21st at Coteau des Prairies Lodge. Everyone is welcome, but space is limited and meals are available by reservation only. Alcohol will be served only to those over 21 years of age. The price is $75 per person. The meal includes a gourmet five course meal and 5oz. of beer served with each course. Water and coffee will be provided. Sodas and additional alcoholic beverages will be sold at the bar.