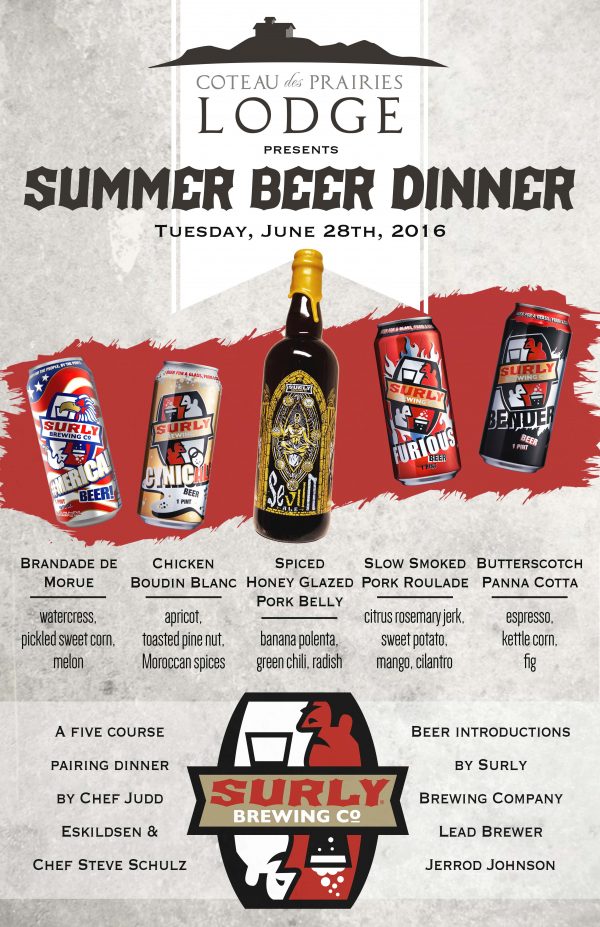 We are hosting a unique beer dinner on the evening of Tuesday, June 28th. We are featuring five amazing craft beers from Surly Brewing Company paired with a five course dinner designed and prepared by Executive Chef Judd Eskildsen from Proof Artisan Distillery (Fargo) and Executive Chef Steve Schulz from The Toasted Frog (Fargo). Lead Brewer Jerrod Johnson from Surly Brewing Company will also be joining us for the evening.

At our Summer Beer Dinner, you will experience a ‘one night only’ menu complete with brewery stories and expert pairings. Jerrod will introduce each of Surly’s beers and tell us all about his experience with Surly, a brewery which almost single-handedly forged the modern craft beer renaissance in Minnesota. Chef Judd and Chef Steve will describe the pairings as each course is served.

We will be featuring a couple of Surly’s specialty brews as well as a few of their flagships. For our dining guests only, Surly Brewing is opening their cellar and bringing a supply of their rare – extremely rare – seventh anniversary beer, which has been aging for three years. SeVIIn is a Belgian Style Strong Ale and it’s not for the faint of heart! This is your chance to try it. SeVIIn was a one time release beer which earned a legendary reputation and will probably never be available again in North Dakota. We will also be drinking Surly’s new seasonal beer #Merica, a pre-prohibition American Lager. It’s a crisp, light beer brewed with generous quantities of flaked corn…it’s perfect for summer in North Dakota!

Guests will also enjoy live music from the talented Fargo based band The Cropdusters.

Surly Brewing Company is kind of a big deal. Since 2006, when they ushered in a new era of craft beer in Minnesota, Surly has become the face of the craft beer revolution. In 2007, Surly was voted ‘Best Brewery in America’ by Beer Advocate. Through grassroots efforts by Surly and its growing base of fans in 2011, the ‘Surly Bill’ passed in Minnesota which overturned a 78-year old prohibition era law restricting beer makers from selling beer at their breweries. Hence the explosion of new breweries and taprooms in Minnesota, the Land of 10,000 Lakes…and now over 100 breweries! Surly is known for its bold flavored, style defying beers. When you open a Surly, you know you are about to have an experience unto its own. With that being said, Surly is also known for food/beer pairings. Food & Wine Magazine just named Brewer’s Table at Surly one of America’s Top 10 Restaurants of the Year. In May of this year, Surly came to North Dakota for the first time.

Surly Lead Brewer Jerrod Johnson, our special guest for the dinner, is a native of North Dakota. 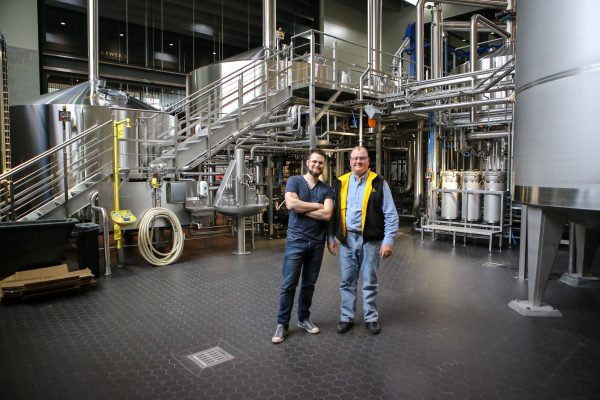 This menu was created as a collaboration between two of Fargo’s top chefs. They will team up to execute the dinner at the lodge on June 28th.

Executive Chef Judd Eskildsen leads the culinary team at Proof Artisan Distillers in downtown Fargo. Judd’s rapid rise to notoriety in the Fargo food scene came as no surprise to dining guests here at the lodge who attended his previous dinners. Judd has accumulated an impressive collection of culinary awards in his short stint as a chef.

Executive Chef Steve Schulz leads the culinary team at The Toasted Frog, a premier restaurant in downtown Fargo, ND. Steve honed his skill in some of the best kitchens in the Twin Cities including the renown restaurant Travail. Fargo food lovers are wise to the fact that the Frog is where it’s at. Judd was Steve’s protégé at the Frog for a period.

The Cropdusters are a rotating cast of local musicians performing duo/trio sets in a varying combination of styles and influences. The Cropdusters are a staple at dining establishments around the Fargo-Moorhead area. They create the perfect atmosphere for fun with friends and family.

The event is on Tuesday, June 28th at Coteau des Prairies Lodge. Everyone is welcome, but space is limited and meals are available by reservation only. Alcohol will be served only to those over 21 years of age. The price is $75 per person. The meal includes a gourmet five course meal and 5oz. of beer served with each course. Water and coffee will be provided. Sodas and additional alcoholic beverages will be sold at the bar. Doors open at 4pm, guests are welcome to come early, tour the lodge and enjoy refreshments served at the bar. When you arrive at the lodge, sign your party in with our hostess. Guests will be seated for the meal promptly at 6pm.