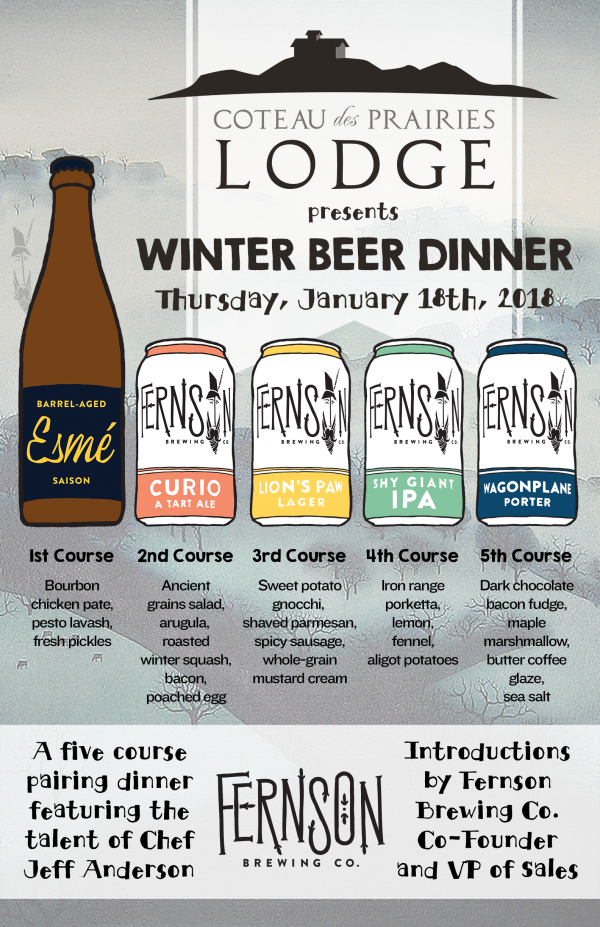 On January 18th, 2018, we are hosting Fernson Brewing Company at our Winter Beer Dinner! Fernson Co-founder (either Derek Fernholz or Blake Thompson) and VP of Sales and Marketing Riccardo Tarabelsi will be introducing their beers. Returning Guest Chef Jeff Anderson from Blue Plate Restaurant Co. is planning a five course pairing menu, which will be amazing, as usual!

We have hosted 12 beer dinners at Coteau des Prairies Lodge, each time with a different local brewery, and although we are located just 3 miles from South Dakota, we have not yet featured a South Dakota beer. Make no mistake, South Dakota produces some fine beers! We are thrilled to finally show off some incredible beers from The Mount Rushmore State.

Fernson, from Sioux Falls, is relatively young on the beer scene with just 3 years under their belt, but they have quickly established themselves as a local favorite with their unique and great tasting beers.

Guests will enjoy a barrel-aged saison called Esmé. This limited release beer is a double strength farmhouse ale that was aged 4 months in wine barrels. We can’t wait! We are also featuring a lineup of Fernson’s great flagship brews including a German-style lager, an IPA, a sour and a porter.

Fernson Brewing Company was created by two young men with a common vision to build a brewery. Derek Fernholz and Blake Thompson, introduced by friends, quickly became allies as they shared notes and brewed together. A business plan was set into motion. A brewery was designed and secured. Three years later, Fernson Brewing Company is well on its way to becoming a regional brewery known for bringing people together over unique hand-crafted beers.

Jeff Anderson is the Culinary Brand Manager for Blue Plate Restaurant Co. and has served as Executive Chef at multiple Twin Cities restaurant including The Lowry and The Freehouse. His amazing ‘cooking from scratch’ style has earned him quite the following. Jeff makes everything in house and that will be the case for our Winter Beer Dinner. Everything on the menu is made fresh just for the event.

Jeff is a familiar face in the kitchen at Coteau des Prairies Lodge where he has already put together some incredible beer pairing dinners. His previous pairings at the lodge featured Brau Brothers Brewing Co., Lucid Brewing Co., Fargo Brewing Co. and Fulton Brewing Co.

The event is on Thursday, January 18th at Coteau des Prairies Lodge. Everyone is welcome, but space is limited and meals are available by reservation only. Alcohol will be served only to those over 21 years of age. The price is $70 per person. The meal includes a gourmet five course meal and 5oz. of beer served with each course. Water and coffee will be provided. Sodas and additional alcoholic beverages will be sold at the bar. Doors open at 4pm, guests are welcome to come early, tour the lodge and enjoy refreshments served at the bar. When you arrive at the lodge, sign your party in with our hostess. Guests will be seated for the meal promptly at 6pm.