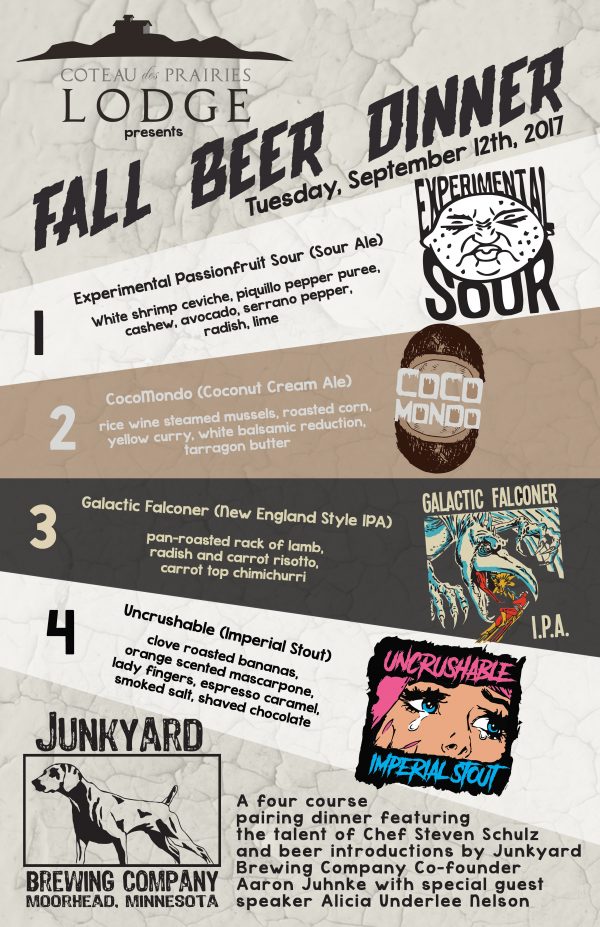 On September 12th, 2017, we are hosting Junkyard Brewing Company at our Fall Beer Dinner! Junkyard Co-founder Aaron Juhnke will be introducing his beers. Returning Guest Chef Steven Schulz from The Toasted Frog is planning a four course pairing menu, which will be amazing, as usual!

We have been talking with Aaron from Junkyard about doing a beer dinner at the lodge for over 3 years. Junkyard has been very busy making enough beer to keep up with the demand of their thirsty fans. We feel very fortunate they are reserving 4 kegs of their best brews to feature at our Fall Beer Dinner!

In addition, local author Alicia Underlee Nelson will be holding a book signing event before the dinner and speaking during the dinner. Alicia’s new book North Dakota Beer: A Heady History was released this summer. We will have copies for sale at the event.

We will be harvesting fresh hops on the Breker farm the day of the event for guests who love fresh hop infused beers. 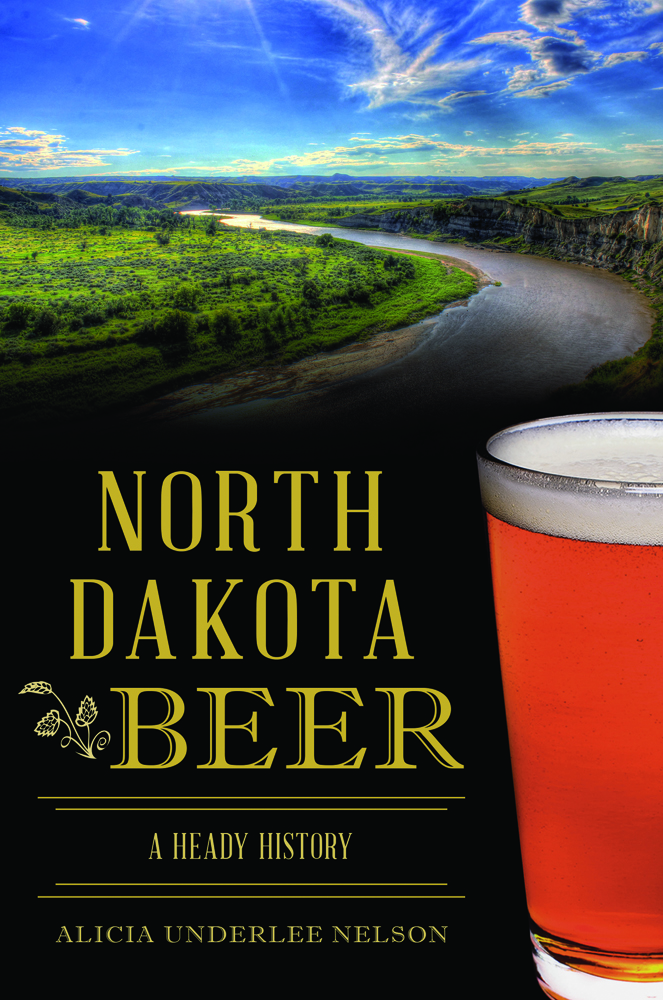 Before North Dakota obtained statehood and entered the Union as a dry state, the region’s commercial beer industry thrived. A lengthy era of temperance forced locals to find clever ways to get a beer, such as crossing the Montana and Minnesota borders for a pint, smuggling beer over the rails and brewing at home. After Prohibition, the state’s farmers became national leaders in malting barley production, serving the biggest brewers in the world. However, local breweries struggled until 1995, when the first wave of brewpubs arrived on the scene. A craft brewing renaissance this century led to an explosion of more than a dozen craft breweries and brewpubs in less than a decade. Alicia Underlee Nelson recounts North Dakota’s journey from a dry state to a booming craft beer hub.

Alicia Underlee Nelson is a freelance writer and photographer who covers craft beer, travel, art, entertainment, midwestern history and North Dakota news for Thompson Reuters, Delta Sky magazine, AAA Living magazine, Matador Network and numerous other travel, news and lifestyle publications. She lives in West Fargo with her husband and son. Follow her adventures across the Upper Midwest and the prairie provinces of Canada at prairiestylefile.com.

The event is on Tuesday, September 12th at Coteau des Prairies Lodge. Everyone is welcome, but space is limited and meals are available by reservation only. Alcohol will be served only to those over 21 years of age. The price is $70 per person. The meal includes a gourmet four course meal and 5oz. of beer served with each course. Water and coffee will be provided. Sodas and additional alcoholic beverages will be sold at the bar. Doors open at 4pm, guests are welcome to come early, tour the lodge and enjoy refreshments served at the bar. When you arrive at the lodge, sign your party in with our hostess. A book signing with Alicia Underlee Nelson begins at 5pm. Guests will be seated for the meal promptly at 6pm.